After a couple of years slogging away to keep the developed world abreast of ‘What I am listening to…’ or ‘What I’m eating in Berlin…’, I’ve decided to promote myself from Staff Writer to Editor-in-Chief. The fruit of this timely promotion is Manchester: In Residents. It's a more-than-occasional series in which I submit a gruelling questionnaire to a host of happening Mancunians and invite each of them to spill their guts about the pretty gritty city.

‘They say you can take the girl out of Manchester, but I rather suspect that to be false…’ 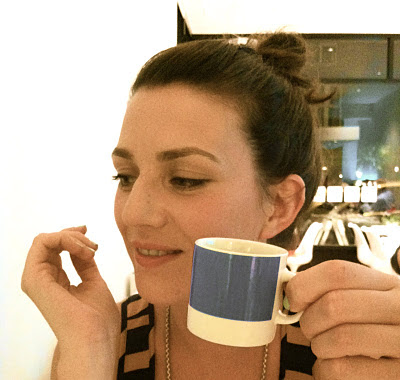 I write the Manchester weekend feature for the Emerald Street style and culture guide, plus a handful of arty pieces for Creative Times. I also work in Events and Marketing for the Confucius Institute at Manchester University. It’s sort of the Chinese equivalent of the overseas British Council. I started there a year ago and since then I’ve learned so much about Chinese culture that otherwise I might never have known. The Chinese community is huge in Manchester yet it’s still seen as ‘other’ in lots of ways. My colleagues regularly present me with brilliantly unpredictable snacks like ‘moon cake’ or sweets made from dried beef. We celebrate festivals I didn’t know existed and now I’m trying to learn Mandarin.

Tell us the story of how you ended up in Manchester

I’m only nearly from Manchester. I’m actually from Stockport, a condition of adjacency that I’ve spent much of my life trying to compensate for by putting myself squarely in the middle of things. I have a Stockport complex. As a young teenager I rarely ventured to Manchester, favouring the relative safety of a piss-soaked M60 underpass at Junction 1 where my friends and I could smoke stolen Lambert and Butlers and play our Shine compilation CDs in peace.

In later adolescence my mum would take us to Laser Quest on a Wednesday from which we would return insensible, having spent the evening snogging boys and taking acid in the sticky-carpeted rabbit-warren of basement corridors at the Ritz. It’s where I discovered how much fun you can have at night. I’ve still never been to Laser Quest. Whitworth Street was the place for us then and it still thrills me now. (I am thirty).

After university I left the UK altogether, living firstly in Montpellier and then in Amsterdam, only to end up forty-five minutes down the road studying in Stoke on Trent. It was only after my son was born that I stopped my hesitant orbit of Manchester and actually started to take root here. Now I feel part of the city.

For me the answer is ‘everything’. To walk the streets of the city you grew up in sometimes means suppressing an almost debilitating litany of Proustian moments. Everywhere I look I’m assaulted by memories tumbling over one another: places I’ve worked, places I’ve fallen over, places I’ve cried or been kissed; they’re all here somewhere. Places only really take on meaning through the convergence of thousands of these kinds of memories, but the city in your head is one that only belongs to you. The topography of memory is distorting; it’s like one of those maps that depicts countries of the world in proportion to their ownership of global capital. So the shabbier bits of the Oxford Road corridor are, for me, fat and over-determined with meaning, while ‘slick’ places like Deansgate and Castlefield seem faint and puny by comparison.

Then there are corners and alleyways that designate a space in which I feel a memory ought to be; places I know are important because something once happened there, even though I might not be quite certain it happened to me, or even what it was, but still the place feels important (though this might be something to do with the rain, or Joy Division…).

The point is, once you’ve lived somewhere long enough, it’s not just part of you, you’re part of it. They say you can take the girl out of Manchester, but I rather suspect that to be false.

The same thing that’s not so great about any city; filth, crime, douchebags, traffic... I wish the 42 went all the way to my front door. I wish the Apollo was in some place you were less likely to get beaten up and robbed on the way home from.

I love libraries. For sheer magnificence the John Rylands has to take it. You can’t argue with that much Victorian Gothic splendour. The way it looms defiantly over Deansgate with all that dusty red sandstone reflected in the glass and chrome of Spinningfields makes me happy. It feels like a call to arms.

My favourite has to be The Portico though, a magical place introduced to me by my friend Emma. It opened in 1806 as a private library and newsroom housed in an otherwise unremarkable neo-classical building on Charlotte Street. Elizabeth Gaskell and Charlotte Bronte both wrote there. It’s where Roget began writing his Thesaurus. It’s quite discreet from the outside but inside is a huge ornate glass-domed ceiling that takes your breath away. It smells of history and leather and the light streams in as if it owns the place.

I love the Granada building too. Even though it’s aesthetically foul, when I was little it felt like Disneyland. Until I was eleven I was in St Winifred’s school choir (of ‘Grandma We Love You’ fame) which meant I got to go on special trips. One of our teachers, Eamonn O’Neill, used to moonlight as a TV producer so we would sometimes go and review films. The first time I really remember going to Manchester city centre was to watch Fievel Goes West before heading off to Granada to look into a camera and inform the viewing public that it was, ‘Dead good and dead interestin’...’. I later realised I wasn’t actually in Manchester, I was in Salford, but nonetheless the experience left a huge impression on me.

My least favourite Manchester building is the ungodly temple to low-end retail experiences that is the Triangle Shopping Centre. It’s hideous. I still yearn for the patchouli-infused fustiness of the old Corn Exchange whenever I’m forced to go in there. It makes me sad for all sorts of reasons.

My friends are the best Mancunians I know and I can’t very well go choosing favourites (obvs it’s Greg *winks*). I like quasi-mythical city centre characters like the super-camp Freddie Mercury lookalike with fabulous posture who parades down Market Street, the disco taxi driver, and the Magic Bus lady. Also Anthony Burgess. And Tony Wilson. And Emmeline Pankhurst.

Fletcher Moss Park for walks, the Whitworth Art Gallery and the Cornerhouse for contemporary culture, the Great Kathmandu on Burton Road for Nepalese food, San Carlo for upmarket eats (if you’re buying), pints and chasers at the Briton’s Protection, gigs at the Deaf Institute, maybe a quick one in Common depending on who’s in there, some sort of filthy disco at Legends then maybe Big Hands for a nightcap and snooze on a sofa.

A tram service that runs south to Didsbury...oh hang on a sec.....

That’s a hard one. To be honest I’ve never been much seduced by the prospect of being a municipal figurehead and I suspect the answer is ‘...do a lot of admin’. However, in the spirit of the interview, I would get the Manchester Bee tattooed on myself, insist on a cameo in Corrie and make every member of the City Council work at Wood Street Mission for a day.

Hello Everyone,
This concept is very useful. I just came to your post and reading above thing it is very impressive me and it is very nice blog.Thanks a lot for sharing this....

Thanks for reading Michael

HAHAHA'the Magic Bus Lady'. It would be the longest blog post ever.