The bit of Manchester I consider the ‘neighbourhood’ is small, but since you can maybe walk across the whole city in half an hour I shouldn’t be greedy with my coverage. To my reckoning, nay, my specifications, the neighbourhood stretches east to the end of Whitworth Street, taking in Legends (once the Twisted Wheel) and the majestic London Road fire station (monkey’s favourite building in Manchester), then over the road to the back of Piccadilly Station (and if I am feeling greedy, a little further to the Star and Garter). 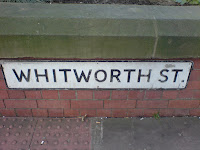 North is a little way up Princess Street past my friends’ Kirsty and Keith’s flat where they reside with their gorgeous city kittens Eric and Bo, up to the junction with Mosley Street where Koh Samui (excellent Thai restaurant) sits on your left and the City Gallery sits on your right.

Up west from my front door is, surprisingly, Whitworth Street West, to Great Marlborough Street where my sister lives, and The Ritz where The Smiths and countless others have gigged. 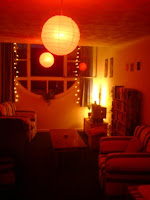 South is down Oxford Road, past the BBC, taking in Odder, Kro 2, 8th Day and, behind that, the Sugden Sports Centre, aka ‘the gym’.

I am happy here in this little island. I have two parks (Sackville and All Saints), an indie cinema, a supermarket, gay pubs, straight pubs, two train stations and food from around the world. It ain’t bad.

My flat is inside the labyrinthine Grade II, 102 year old Lancaster House, a building I had fantasised about living in for ages. Don’t imagine I own though, no no, I’m one of the down-at- 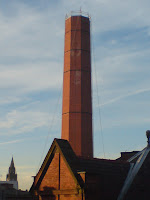 heel rental neighbours bringing ‘character’ to the place. It’s having a facelift for the summer so is sadly about to be hidden by scaffolding (the tips have just reached my window). It’s not easy looking this good at her age. If you check the link you’ll see the big round windows belonging to my flat, four floors up (‘Four floors up on the Charing Cross road and never a job at the top of them’, says Uncle Monty). From here I can see the CIS, Portland and Piccadilly towers, the Minshull Street Courts, the Town Hall and the splendid mill chimney directly opposite, whose name and origins I have yet to find out but I will, I will. Yesterday there was a man right on the top hanging off a little platform. It must also be having a spring clean. I spend lots of time hanging out of my window and nobody ever looks up.


Soundtrack: Space singles, The Concretes
Posted by Unknown at 15:02 No comments: Links to this post

I’ve always been excited by even the idea of New York, right from seeing Ghostbusters at aged eight, watching Cagney and Lacey with my Mum, and reading about Gotham City and Metropolis in my comics. My real obsession began at 16 and grew from a number of things that had either accumulated in my life to that point or that I was just discovering; Woody Allen, Warhol’s Factory, architecture, CBGBs, the Algonquin Round Table, Studio 54, Max’s Kansas City, hip hop, the Beat poets …

I still have the 1996 Time Out New York guide, bought and inscribed for me on my 18th birthday by my then best friend Claire, in which I read the listings cover to cover as though the whole thing was a novel. A café staffed entirely by identical twins! A Chinese restaurant housed in an old gay sauna where the waitresses were all Asian drag queens and sang ‘Happy Birthday’ whether it was your birthday or not! These places are no doubt long gone but the idea of them will always excite me beyond measure. I even had a clock in my room set to New York time. I meant it, man.

One of the endless summers I spent looking after my little brother and sister was in fact spent in my room reading my Time Out and wondering how to make it there. Because, in case you haven’t heard, if you can make it there, you can make it anywhere. Of course I couldn’t make it there. Crippled with shyness and not a penny to my name, it was hard enough to make the leap from Blackpool, where I grew up, to Manchester, where I really grew up. Geographically small the leap may be, socially and culturally, to me, it was vast.

Fortunately my affair with Manchester was also long-running and passionate. I first came here aged 13, ostensibly to find John Squire, telling my Mum I was only going as far as Preston. Preston was home to the nearest independent record shop where I was forced to go at even that tender age when I couldn’t find the records I wanted in ordinary record shops. In love with The Stone Roses, Happy Mondays, Madchester, baggy, and above and beyond all, The Smiths and Morrissey, I was duty bound to love Manchester too, and I did.

The city to me consisted solely of Piccadilly, Oldham Street and the wonderful Corn Exchange, but that was more than enough when I could effortlessly make a tenner, ten Regal and the will to be here last all day. I recall a slight sinking feeling as the train arrived back home. I still get it now, mildly, but it’s tempered with the fact I’m excited to see my folks. These days when I leave Manchester, that’s when I’m leaving home behind. So, it became my surrogate New York, though in truth it’s not a surrogate for anything. I think Manchester holds its own as one of the great cities. I am still excited, sitting here, writing this, to be in the middle of it all. In my own teeny tiny way, I have made it here.


Note: I’ve been itching to hear Arcade Fire’s No Cars Go all day so I whacked it on youtube as soon as I got home. I never noticed before how much it sounds like Prefab Sprout. Oh my oh my.

Well, myspace was fun while it lasted, and my obsession with facebook is drawing to its inevitable close. I only go there for the Scrabble now, that and a 3000-plus message thread I have going with some friends which is surely bound for the Guinness Book. Really though, I don’t understand the dozens of groups where everybody joins but nobody does or says anything. It’s all just endless affiliation. I’ve decided instead that I’d rather know a lot about a very few people than a little bit about 120 people, so I’ve been hunting for interesting blogs of late. I’ve settled on a handful that I seem to enjoy. This one, of course, I love. Two belong to nuns (make of that what you will), one is an American art professor, one is a gay guy in London. I like to read about his sexual conquests written in formal / online directory / school newspaper style (‘I’ll definitely go there again …‘, ‘A good time was had by all …’)

My favourite though is this lovely journal by a wonderfully funny and erudite man, member of Readers Wifes, part of the Duckie collective and culture junkie extraordinaire. I saw Readers Wifes play an aeon and a half ago at Homoelectric in the halcyon days of electroclash and they were fierce indeed. His blog makes me laugh out loud which is more than I can say for anything I’ve read in print of late. I’m tempted to re-read A Confederacy of Dunces just to remind myself it’s possible. This, however, is forbidden for reasons I’ll come to later.

For now, I realise some basic info is customary but rather than do one more tired online ‘profile’ (I think I’ve had five already) I’ll mostly just write this thing and let information surface that way, that’s much more interesting to read I always think. That said, I am thirty, I live in Manchester, this is my twelfth year in the city, I am, like lots of people I know, doing one thing (working) and aspiring to do another (writing). This blog is in part to help me flex my writing muscle without impinging too much on what I’m ‘really’ writing, which is fiction. One day though, when I am published and they are teaching a course on my writing, scholars can come to this blog and dig up my little ingots of wisdom, or else criticise my syntax.

Let’s see what the blogging future holds. It’s goodbye for now, The Simpsons is about to begin. Join me in praying it won’t be the ‘Bleeding Gums Murphy’ episode again … Oh it’s ‘The Telltale Head’, I’m sure this was on just last week … Sigh. Well, goodbye for now.
Posted by Unknown at 19:11 2 comments: Links to this post