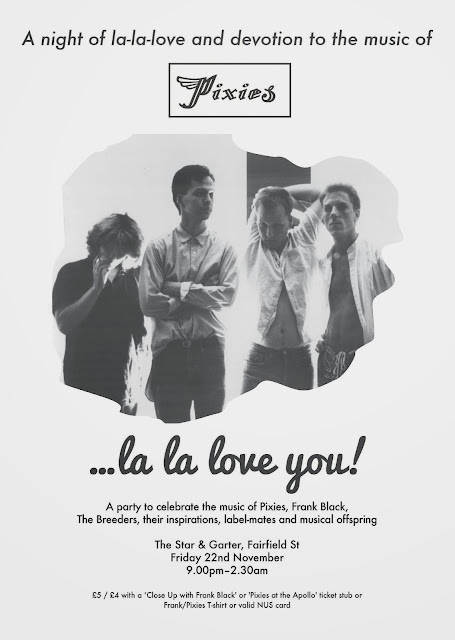 To celebrate the Pixies landing in Manchester, with brand new material in the bag(boy), Manchester is having a Pixies three-dayer.

First up, on Wednesday November 20th, Dave Haslam goes ‘Close Up’ in conversation with Frank Black/Black Francis himself in a super rare event at the beautiful Albert Hall on Peter Street.

Finally, round off the Pixies triple-bill with our full-on Pixies party at the legendary Star & Garter pub on Friday 22nd.

...la la love you! will be airing all your favourite Pixies tracks plus the best of the rest from Frank’s solo records, the mighty Breeders, and an eclectic mix of gems from the 4AD label and Pixies-world, including Cocteau Twins, Husker Du, Kelley Deal 6000, Ramones, Nirvana, Peter, Paul & Mary to name but a few...

So, come and dance the Manta Ray to some good clean Rock Music, wake up with a Headache, we’d la la love you to join us ...

£5 entry, £4 with a Dave Haslam / Apollo ticket stub / Pixies T-shirt / valid NUS
Posted by Unknown at 15:10 No comments: Links to this post

Morrissey: Autobiography, the view from Manchester 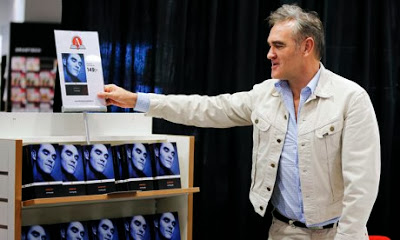 The Smiths were a major part of the reason I moved to Manchester half my life ago, although I wasn’t expecting to find them still hanging round the Arndale Centre (or maybe I was…) In any case they were done and dusted by the time I arrived in September ‘96. The city centre was in shreds after the Corporation Street bomb in June, the Hacienda was a few months from shutting up shop for good, and even Morrissey’s solo career highlights were largely behind him.


I’ve always enjoyed the unique line Morrissey manages to tread between potential tabloid fodder and pop’s last enigma. The confessionals are there on the records if you want them, but in terms of the life lived behind the songs there was always a certain gravitas that came with not knowing too much. Someday soon we will no doubt be faced with Morrissey: The Movie made by a twenty-four year old Californian newly-besotted with The Smiths, and it will be monstrous, and Morrissey is wise to get his version of events in first. But, as Germaine Greer said of Michael Jackson’s never-to-be comeback tour, I for one was dreading it…

A great lyricist doesn’t necessarily make for a great prose writer of course, and when it emerged that Autobiography would be packaged in advance as a ‘Classic’ – a bit like those two-year old Disney films you’ve never heard of – I feared Morrissey’s literary aspirations might bury his story under pretension and hyperbole. The opening pages threaten to do just that. Where you might expect the standard biographical establishment of family line, or in this case perhaps a grisly flash-forward to the notorious Smiths’ royalties trial, the introduction is at least original and is given over to the city of Manchester itself, as Morrissey finds it and as it finds him, ‘where everything lies wherever it was left over one hundred years ago.’ There is added sentiment for me in his naming lesser-known Mancunian locations that I know well and could cycle to in minutes: Mayfield Road, Longford Park, The Three Legs O’ Man. But the city is hard, and is only the most brutal character in a brutal line up. At home the Dwyer/Morrissey family cossets, but school and the streets are a Darwinian assault course where the girls start the fights and the boys, including our hero, take it on the chin.

Morrissey’s prose style is verbose, riddled with adverbs, often rambling, and, like his later studio albums, you have to take the rough with the smooth. So for instance, while we might have coped with slightly fewer film plot synopses, these are offset by glorious descriptive passages on 1960s television, destined to be quoted in academia. But for the most part, what Morrissey has written is an accomplished, moving and occasionally hilarious present-tense narrative, which, when he can take control of his writing, rings with the bold veracity of a semi-ordinary boyhood and a truly extraordinary adult life. In one scene he is a child, mesmerised, watching David Bowie establish his extra-terrestrial magic on the television – in the very next moment he is back in school witnessing the needless abuse of a classmate for biting his nails. The sensation of yearning for something bigger, more exciting and more civilised is painfully tangible in the contrast.

Morrissey is at his inflamed best when discussing music. The New York Dolls are ‘the slum of all failures, had nothing to lose and could scarcely differentiate between night and day.’ Siouxsie Sioux is ‘a black-eyed shopgirl hidden somewhere in the whistling cathedral towers of Notre Dame’, the music she makes is ‘a strict ice-bath of nightmare and caution.’ Oddly then, when it comes to his own music, Morrissey’s powers run dry. Of that batch of immaculate early Smiths songs that seemed ready to burst, perfectly intact from a Stretford bedroom and drafty rehearsal space, the author is quiet to the point of frustration, and before you know it The Smiths are off on their first US tour. While we learn that the Algonquin Hotel is riddled with cockroaches, or that 80 per cent of global warming is attributable to the meat industry, That joke isn’t funny anymore has been written, and Shakespeare’s sister – described by Morrissey at the time as ‘the song of my life’ – with no mention of how, or why. Now is the time to say! Instead we receive a statistician’s dull smorgasbord of Billboard positions and venue capacities in American cities, and suddenly The Smiths are through.

There is plenty of humour along the way though. At a Roxy Music gig, singer Bryan Ferry ‘shuffles crab-style from stage left to stage right like someone who’s had his food dish removed.’ Of a flamboyant teenaged acquaintance Morrissey writes, ‘I am astounded at his survival in child-eating Collyhurst.’ Russell Mael of Sparks, ‘sings in French italics with the mad urgency of someone tied to a tree.’ These cultural snapshots suit Morrissey well – in his oblique way he suggests it might even have been the words of poets John Betjeman or W. H. Auden that persuade him to be a performer – anything more monumental (Thatcher, Nature, the justice system) and he resorts to histrionics. An uncharacteristically restrained summary of singer Sandie Shaw’s music is later explicated as a grudge held over Shaw visiting Germany with The Smiths and leaving Morrissey at home. Morrissey is the man, let’s recall, who knelt at Shaw’s feet clutching a rosary, and the antennae are thereafter poised for other personally-motivated revisions. Rough Trade Records emerge as a collection of the stupidest people ever to end up in the wrong profession. In particular Morrissey is able to recall verbatim the countless idiot statements that leave the unfortunate mouth of label owner Geoff Travis. Producer Stephen Street he admires, and Mick Ronson, and Angie Marr, and, for a long time, Johnny himself – until the trial.

When the trial arrives, in which Smiths drummer Mike Joyce sues Morrissey and Marr for a quarter of all Smiths royalties (despite there being no contract to that effect), down comes Johnny from his pedestal for the crime of collusion, and in Morrissey’s eyes The Smiths are irrevocably toppled too. It is a convoluted and bizarre miscarriage which you might be forgiven for thinking is happening in real time. Fifty pages are consumed by it (whereas a ground-breaking song like Asleep, for instance, about which whole essays have been written, warrants not a mention). Throughout the trial, the book, and his life, Morrissey is unaccountably unable to find a good manager, a viable lasting record deal, or any decent legal representation (while his penniless ex-drummer romps to victory on the strength of free Legal Aid). What this sad litany of underperforming individuals undeniably have in common is Morrissey himself. The greatest insights in Autobiography might exist between those lines – Morrissey simply cannot deal with other human beings – but then he did tell us that before, once or twice...

As in life, there are no chapters, barely any paragraphs and no index, therefore no skipping ahead to Jake Walters or Alan Bennett or the Finsbury Park debacle. It’s written in US spelling throughout, for whatever reason, and ‘The Smiths’ are apparently ‘the Smiths’.  These things count. As a special mention, the blurb is atrocious, obsessively listing chart positions and sales, name-checking Tel-Aviv and My Chemical Romance (!) but not Johnny Marr. For some reason Morrissey is horribly mean about fat people and occasionally denigrating about women's bodies. If you don’t like it, don’t look at it… And as for Mike Joyce – who was apparently able to galvanise all of the dislike towards Morrissey that had ever existed into crippling monetary fines and a public humiliation – there’s a tiny bar just a few doors down from my flat in South Manchester where Mike DJs every Thursday night. Whether he plays for love or money, I couldn’t say.