'It's crazy how a small city like this can have so many promoters and artists out there putting on their own stuff and making a really good go of it, and there's a real togetherness between most of them too...' 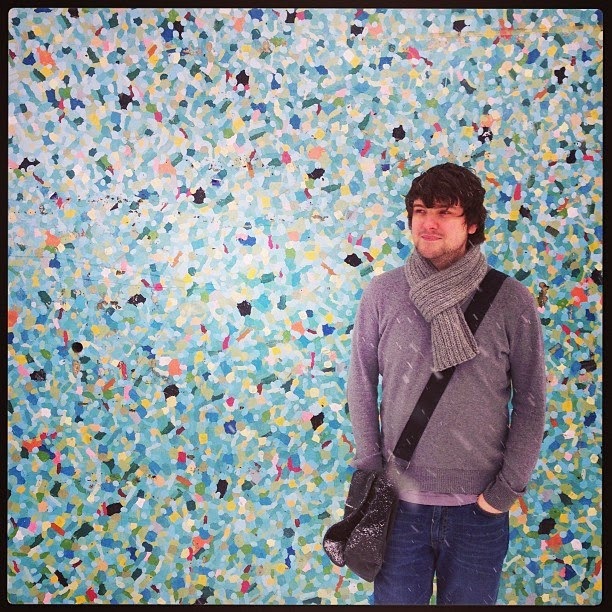 James Victor Travis, or JVT... Or just James if you prefer. Never Jamie or J, though.

I work in Social Media for a popular hotel booking site in the centre of the city, it's a pretty good day job to be honest. I'm also the chap behind the Dots & Loops club and gigs, and sometimes DJ elsewhere when people will have me. Other than that, I'll probably be at home listening to Leonard Cohen.

I'm living with my girlfriend in West Didsbury at the moment, just off Burton Road. The flat is kinda weird because it's above a house share that we have to pass through to get to it, but it's totally our own space. The other day we needed to get access to the basement below the house share to store some junk, and it turns out the basement is a disused recording studio. I mean, it isn't in operational order right now, but it's pretty damn cool down there.

It's hard to elaborate on how I ended up somewhere I've always been. I was brought up in Rochdale and studied at Salford Uni for a couple of years and I never made the decision to move away anywhere else. I've often considered moving away, but it never came off for one reason or another... it's definitely likely in a few years or so, but I'm quite comfortable for the time being.

There's never a lack of good shows or events, and it's a really creative place with a good atmosphere. It's crazy how a small city like this can have so many promoters and artists out there putting on their own stuff and making a really good go of it, and there's a real togetherness between most of them too. The record stores, of course... People complain about the weather, but I quite like it these days.

The high street is pretty awful. People can say what they like about HMV, but to see that store close down and become a 3-storey bargain place is pretty depressing. It's just scaled down supermakets and mobile phone stores now. Piccadilly Gardens is a real mess too, and that big wheel hasn't done much for it. I really can't tolerate Spinningfields, but each to their own and all that. I'm not really a city centre kind of guy I suppose.

The old fire station by Piccadilly train station, it's a really impressive building, absolutely stunning. It's a real shame that Britannia Hotels (who own the building) continue to neglect it. They came up with some nonsense about there being no demand for more hotels in the city, but then you see there's more and more hotels being proposed and approved every year. It's really hard for me to understand what they're trying to do there, very unusual. Hopefully there can be some kind of resolution soon, but it's been 20-something years as far as I'm aware, so I'll not hold my breath. It's not like a new hotel would be my preferred option for the place anyway, but it needs to be SOMETHING. The worst building? Has to be that premier inn. What a shocker.

I don't really have a favourite Mancunian that comes to mind. I guess I'll be real nice and say my Papa. It certainly ain't Ian Brown, anyway! Mark E Smith is a funny guy, I like him. Don't reckon he'd like me much, mind...

This is real difficult, there's plenty of nice places! I suppose my favourite places would be Fuel and Kraak. Always a great atmosphere in both those places, and plenty of interesting stuff going on. Islington Mill is fantastic... The Castle is nice to pop in for a good drink and a sit down, and the venue space is pretty handy too. I generally like to stay in with a few records though, and burton road has a really great beer store now called The Epicurean. It isn't cheap, but it's good to be able to just pop into a place and pick up some drinks you're used to only being able to buy at trendy bars here and there.

I think we were missing a good medium sized venue, but the Albert Hall  has that covered really well now. Burton Road really needs a grocery store, I'll say that. I don't think there's enough good outdoor areas in the centre of the city, nowhere to really sit down and relax in the middle of all the madness. That's maybe something they could work on, starting with Piccadilly Gardens.

Make the Metrolink free of charge. Hell, that ain't no kind of service to be charged for.

Kev Rolfe. He's got his own label going on now, and is always involved in other great stuff. He's off around America for a few months but you should grab him after that.


Dots& Loops 8th Birthday is on July 4th including a DJ set from special guest Bob Stanley (Saint Etienne) plus live sets from The Oscillation & Dead Sea Apes. Kraak. 9pm till 4am. £8 advance, £10 on the door. Event page here.

Posted by Unknown at 13:53 No comments: Links to this post

If you've noticed the police and charities tweeting a lot about domestic violence lately it's because they know from experience that this kind of violence escalates sharply during the world cup, especially if England loses. Of course they've lost and so comes the chilling consequence for lots of women. The artist Debbie Elvis Sharp﻿ is staging a hard hitting (literally) art flash mob across three cities to dramatise this horrendous state of affairs. Read the description of the event and if you can please attend, support, share or send to people who you think would like to take part. The cities are Manchester, Leeds and Bradford. Link here. Make some noise.
Posted by Unknown at 11:43 No comments: Links to this post

I promised myself a blog post to take stock of the first six months of my freelancing adventure, and I can’t believe it’s already here. That means 2014 is half finished everyone. I’ve been self-employed since January, and after thirteen years of full-time office life, time seems to pass in a different way these days. I still get up early and try to keep at least half my weekends work-free to stay in sync with Oisín (who is, incidentally, eight months into his first office job), but I don’t miss the the nine to five one bit, and a week is a unit of time that no longer means much at all.

As for the work itself, I’m pretty sure it couldn’t have gone better if I’d been able to mastermind it all in advance. One of the good reasons I haven’t written here for a while is that my writing has been going elsewhere, and to some lovely places too. I contributed to the new Library Live site (and I can’t wait to put on an event there). I’ve been taken on as kind of writer in residence for the jewel in Salford’s crown, Islington Mill, which I’ve turned into a monthly column for one of my favourite sites, Creative Tourist. I’m hoping to get stuck into other cultural coverage for them soon. I haven’t let go of my old publishing skills just yet; I still produce book cover artwork from time to time and I’ve gotten heavily stuck into copyediting books too (ask me anything about the poet Charles Olson or Irish migration in the nineteenth century, ask me!). On top of that, I’ll soon be working on not one, not two, but three exciting art projects for three of Manchester’s finest cultural institutions, about which I am very excited and will reveal more soon.

Over in clubland, Off The Hook is going stronger than ever. Anthony Crank is back beside me on the decks and our new hostess Wan’gu Chafuwa is bringing life-giving performances, being divine, and generally spreading pizzazz wherever she goes. Our next party is tomorrow night (Saturday 21st), so come over and get down, it’s never less than brilliant fun. Here’s what we sound like, if you need persuading. Meanwhile at Drunk At Vogue we are gearing up for a Summer of Love, involving our annual boat party, annual Pride party, and our now-annual appearance at Festival No. 6 (okay, this will be our second in a row). I’ve had no time to hunt for other DJ gigs so I was extra glad to be invited to play at a bit of a star-studded do, namely the launch night party for artist Ryan Gander’s exhibition at Manchester Art Gallery. The party is at Gorilla and the other DJs are Miranda Sawyer, PINS and Mike Joyce from The Smiths. Crazy.

The main pleasure I get out of this mixed bag is that there’s no such thing as a typical day and there’s no time to be bored. If I get too stir-crazy at my desk (it’s easy enough to do when your office is a quarter of your home) I can be cycling or jogging along the Mersey in two minutes. The other day I cycled for an hour in the sunshine and saw ducks, geese, rabbits, herons, squirrels, a lizard, some magnificent bird of prey and only three other human beings.

It all sounds exhausting I realise, but I actually feel more awake than ever. I have lists of ideas I want to pursue, things I want to write, events I want to host. There was one particular idea I’d been sitting on for several months and a couple of weeks ago I got fed up of seeing it on my ‘To Do’ list so I pitched it to someone, found a collaborator, who by chance had had a similar idea herself, and now we are hosting our first event in August (details to follow!). I’m awake to everything, and everything seems really inspiring so I’m drinking it all in, from Janet Mock’s book (I had a lovely Twitter exchange with her) and every Laverne Cox speech and interview, to Katie’s terrific input into my novel, the degree show at the MMU Art School, the new people I’m working with, new bands, old Beatles’ demos, Tom Moulton remixes, (sadly) Goffey and King songs and the great outdoors. Phew.

Watching Inside Llewyn Davis recently, which is beautiful and funny and still on my mind a week later, I felt the unique sadness and frustration of missing your moment. (Spoiler follows). As Llewyn climbs the nightclub stairs to receive a kicking in the alleyway out back, a young Bob Dylan is taking Llewyn’s place on the stage, about to become the new folk sensation that Llewyn will never be. It hits pretty hard. The moral of the story is: don’t miss your moment.

Posted by Unknown at 19:12 No comments: Links to this post