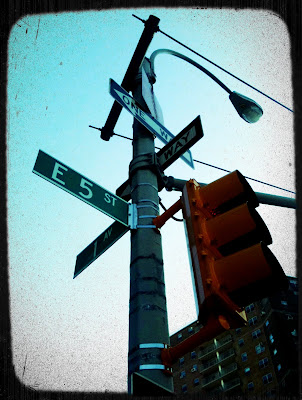 We wake to sunshine on St Patrick’s Day. I head out early to make coffee happen and outside the deli three New York dudes are discussing politics. The phrase, ‘Dude, that’s a fuckin’ oligarchy!’ is followed by a contentious silence.

Caffeined up, we hit the streets armed with novelty Irish hats. Mine is a green baseball cap with shamrock, Dee opts for a more demure green top hat with sequins and a badge that lights up. These hats actually help us blend in, the whole of New York is green and Oirish today. We can’t get over the groups of Hispanic and Korean and Black kids all over the city wearing ‘KISS ME I’M IRISH’ Tshirts, it’s a real tonic. 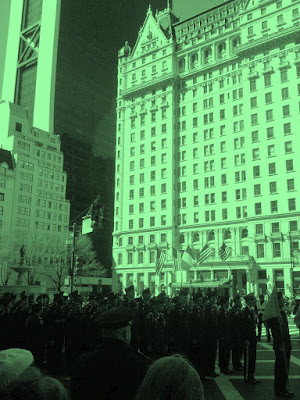 The parade is the 250th to be held on the streets of Manhattan so it’s a bigger deal than ever. 2 million spectators and 200,000 participants. Like the rookies we are we head to Central Park to watch from there and of course it’s rammed. But, by the luck of the (actually) Irish, we somehow find a great spot at the opposite corner to the park. When the people around us hear our accents (well, Dee’s accent) they insist on placing her at the front of the barrier, best seat in the house. ‘Is this the biggest Patrick’s Day parade you guys have seen?’ they ask us. ‘Err, it’s the only one we’ve ever seen.’ They can’t believe it. I feel a little ashamed.

There’s only so many bagpipes a man can stand so we retire to the park which has the most amazing party atmosphere; flags, families, drunk teenagers, more comedy hats, ice-skating, music … oh, I got a bit sad writing that. Bury my heart in Central Park please. Can you believe they sell organic vegetarian hotdogs from a stand there? They’re gorgeous, proper fried onions and neon American mustard. We devour a couple and people watch. 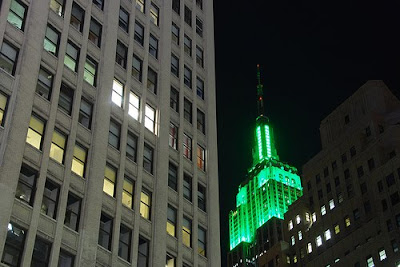 Around the corner in a Korean bar we have the first Guinness of the day and then some time between then and the sun going down and the Empire State lighting up green we have a few drinks and the city is ours and we get to The Pogues gig at Terminal 5 where the atmosphere is electric and completely lashed. Shane MCGowan is white as a sheet and sort of bloated but my god he’s alive and singing. Queens must be a desert tonight. The band yell out the boroughs in turn, in the manner of ‘Anybody here from …?’ and Queens gets an almighty ROAR. Not a mention of England or Ireland. It’s a bloody good sweaty old knees up. The highlight is ‘Dirty Old Town’, a song written about Salford, made famous by Irishmen and sung to and by a room full of New Yorkers. I have an unashamed blub. The world is small, and I honest to God like it that way.

As if we can go home now, we OWN this town. We eventually hail a cab and head to Greenwich Village. As soon as we are poured out onto Grove Street I spot the sign for Marie’s Crisis. 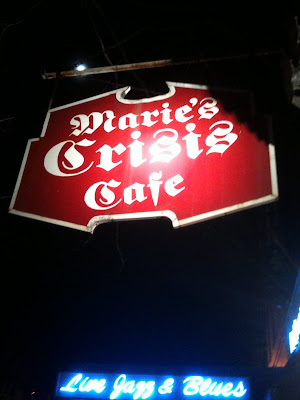 Industrial gin and tonics and we are soon sat around the piano belting out, oh who can remember, Cole Porter and Disney soundtracks and Barbra Streisand probably. It’s heaven underground. We make friends with the amazing Harold and Brian. I smoke. I can’t remember getting home but I will never forget how good I felt. 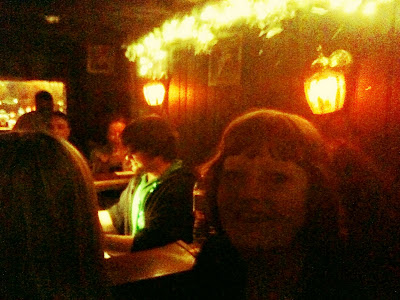 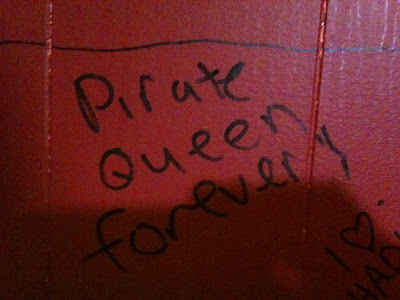